Less than 5 percent of U.S. medical graduates were Hispanic in 2017, that’s why the Hispanic Health Coalition scholarships and similar programs are vital to increasing diversity in healthcare.

Each year HHC give five scholarships to Latino students that show an interest in the health field and show academic potential. Three of the scholarships go to high school seniors, one to a college undergraduate and one to a graduate student.

In 2019, HHC partnered with Grupo Herrera Restaurants to sponsor the scholarships.  At each of their restaurants customers there are a couple of dishes customers can order where the proceeds will go to the HHC scholarship fund.

Daisey Vega from the UH Health and Human Performance program was one of the recipients in 2019.  She is an undergraduate majoring in Kinesiology. After graduation, she will pursue a career in physical therapy and specialize in sports medicine.  Currently, she is a research assistant where she helps with experiments in the lab. When she is not in the lab, she is helping new UH students as part of the campus orientation team.

In the video below, an HHC scholarship recipient and a representative from Grupo Herrera Restaurants talk about the scholarship’s impact. 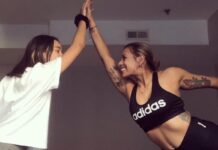